The Vick Genealogy: The Study of a Southern American Family in White and Black

The item  is out of stock at JVFOA.

It is now available at Heritage Books

Search for Public Libraries that have the books at WorldCat

The Vick Genealogy: The Study of a Southern American Family in White and Black, by John Beatty, CG®, was released on January 6, 2023 as two-volume set. It totals over 1,000 pages and includes photographs.  This limited first edition of 250 copies has a hard-covered saddled-stitched binding with dust covers quoting Theodore Shaw, Henry Louis Gates, Jr. & Elizabeth Shown Mills along with a bio about the author, John Beatty. This two volume set was published with the highest heirloom quality available by Walsworth Printing of Missouri.  Many generations of Vick's beyond today will be able to read and enjoy this book.

It has been a generation since the book Joseph Vick of Lower Parish Isle of Wight County, Virginia, authored by John Beatty and Di Ann Vick, was published by James Davis of Genus Publishing.  It was a fascinating book that documented the first five generations of Vicks in America.  Technology in DNA and digital genealogy records has advanced greatly since the book was printed.  This has enabled John Beatty to write a much more complete and thorough history of our first five generations, as well as a new book that extends our genealogy to the sixth and seventh generation.  In addition, John has added, where possible, the history of Blacks associated with the Vick family either through marriage, children, or slavery.  We believe this is one of the first genealogies of an ante-bellum southern family to include this expanded family of white and black members. This book was made possible due to John Beatty’s tireless research into our family and from donors like you that generously gave to our Benefactor Campaign order to pay for the production of printing and binding.  Meanwhile, Larry Vick, using DNA technology has been clarifying uncertainty in the unproven family lines where historical documents do not exist.  John is a certified professional genealogist (CG) while Larry is an expert in DNA genealogy.

Reviews (0) Add Your Review
Currently, there are no reviews for this product. 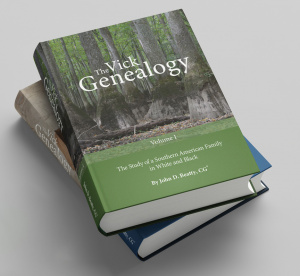